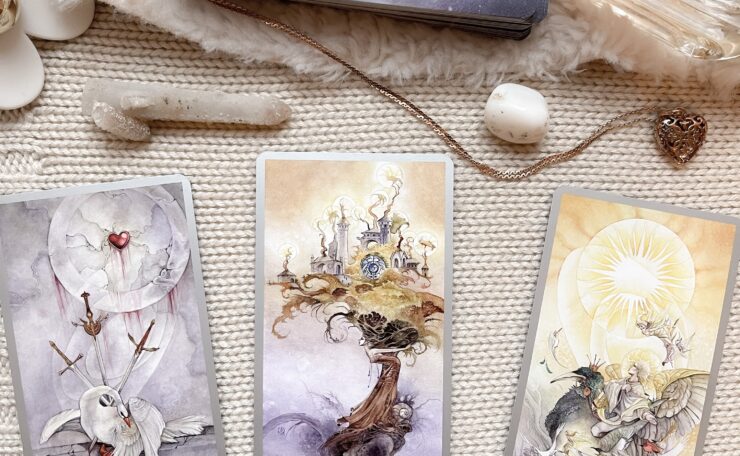 scarletdarkwoodLeave a Comment on Why Vague but Yet so Clear?

There are times when tarot can be vague at first look, but when you delve deeper into it, the card you selected makes perfectly good sense. For example, I was working on a project and wanted to get an idea of what to expect for the duration of the time allotted to it for that day. My cards being nearby, I decided to pick a card and see what the prospects looked like. The card that came up was the 3 of Wands. That card lets you know that you are waiting for your ship to come in. You’re waiting for your handiwork to manifest so you can reap the rewards of all the hard work put into place. Though it appeared “nondescript”, unlike getting The Sun or or The Star, it did remind me that I had to have patience, that most of the time, things don’t happen quickly. Sometimes the effort we put into manifesting what we want takes time, much longer than we want. But that’s the way life is. Once you have an idea of what you want, you have to take the steps to get it, make it real. After you’ve set the ground work in place, it all takes time to come together, for all the circumstances to align just right. So the 3 of Wands is a great card to show that you need not give up because you didn’t get what you wanted on the first day. You have to continue working, showing up, putting in the time and effort for a while, just to see how everything will turn out. It’s so hard to do in a world where we can have many things quickly. We get so impatient and begin to think that maybe what we wanted is not within our grasp. Nonsense! Give something a good year, at least, and see how it goes. You may have to give more time. Yes, there is a time to throw in the towel, but it’s NOT the right time to do that when you’ve just barely started. Whatever it is you want, you deserve it. Stand strong, Persist. Keep your nose to the grind and evaluate much later down the road to see if you need to do something different. Right now, hold the course!

This site uses Akismet to reduce spam. Learn how your comment data is processed.