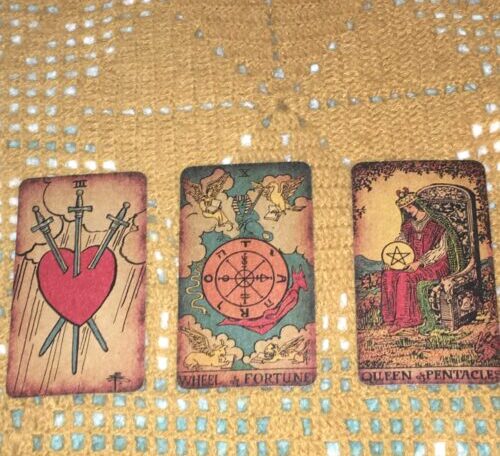 First of all, full disclosure, this tarot pull and the person it was for told me I could share it and all the little juicy details. This isn’t a soap opera I’m about to share (do we even know what those are, anymore?), but I find dreams interesting, especially when a client tells me they are recurring at different times lately, say the past several months, and the person in it was someone they knew a way long time ago. It’s even more interesting when they tell me that they knew this person when they were in their late twenties, and now they are pushing toward early sixties, and suddenly this person is popping up for no explained reason.

They didn’t even have anything special with that person. No strong friendship, no dating relationship. No clandestine meetings at the grocery store. Zilch. Zero. Nada. Oh, wait. They did run into each other at the store once, and they both nodded politely and went on shopping, not even stopping to chat. Of course my client is wondering why all of a sudden this gentleman is coming to her in dreams, and in the dreams, their relationship is just perfect and comfortable like it always existed that way. One time, the gentleman even professed he loved her!

They say dreams reflect our subconscious, our most secret desires or our darkest fears. She confessed that she did like this young man long ago, and their encounters seemed more to smack of “courtly love” (do we know what that is too?) She went on to tell me the odd ways he would focus on her, even if there was a small crowd of people around, and he was in the middle of a discussion. He would always acknowledge her. At any rate, she suddenly got a new job, and she left without even saying anything to him. After all, what was the point? He didn’t seem interested to the point of it leading anywhere.

Now back to the dreams. They left my client perplexed, especially since she’d moved on from this gentleman the moment she left the office. She found a wonderful spouse and had moved on with her life. Her conscious mind kept telling her she was over it, done, that ship had sailed. But something was going on underneath. It is also said that people can communicate through dreams, that due to quantum physics and its principles, we can all connect to or tap into each other’s energy field if we’re open enough.

On to the tarot pull. She asked me to do one, a simple why is this person showing up in dreams after all these years? Especially since she didn’t grieve over anything, didn’t care anymore, and moved on. Especially since nothing ever came of it anyway? What did she need to know, or what were the dreams telling her? She wanted to have the card reading from his angle or his perspective; if he was experiencing something on a subconscious level, what did he want to truly communicate or tell her it via dreams?

Card Pull: 3 of Swords, Wheel of Fortune, Queen of Pentacles.

It appeared that there was a part of him that could be regretting not following through on some feelings he could have been having, maybe not pursuing something when there might have been a chance, or wishing that things could have been a bit different. Life has changed for him now. Or perhaps there simply was too much going on then. But now there still may have been some changes in his life or a change in fortune. He’s set in a career, has security. He may be looking back, surveying his life and thinking about the past. Perhaps the reason he didn’t make a move then was because he was too focused on career and building security. Now he just might be in a position to want to sit back and little and share some things with someone special to him.

My client was detached through the whole thing, though curious. Card pulls from another’s perspective other than the client’s is risky, and usually readers try to steer clear of it, unless there is a good reason to explore more. You are in a relationship with that person, personally involved in some way, or having dreams that are bugging you, and you’re not sure where they could be coming from. My client didn’t really have any regrets, even when she left. She moved on with her life and didn’t look back. And perhaps this card pull is mere speculation, but maybe not. We can’t ask the young man, now a much older man, if the cards hit or not.

I will say this as a lesson to anyone. It’s all fine and dandy to move down paths you think you need to. Or even if you think you would like to. But everything is a gamble. If there’s an inkling that you might like something or to be with someone, sometimes not everything is all about money and career, and so many times that gets in the way. And who can blame a young person for their focus at any given time? That’s just the way life is and the way it plays out. But if you are aware and paying attention at a moment in time, it might be okay to step back out of the race a little and focus on something or someone else as well. Who knows how it can play out? But I’m not doing a card reading for that! Like The Wheel of Fortune, things are all about change (and sometimes some luck!)